As part of this quarter’s investigations into the ways social media and technology can enhance, complement and translate the study of literary classics in my new Stanford class,”Literature and Social Online Learning,” my students tried out a literary Twitter role-play for themselves: Mary Shelley’s Frankenstein, to be impersonated, interpreted, spoofed and socially connected for two days and nights over Halloween, October 30 and 31, 2014, with the hashtag #Frankensteinplay. This time, the prompt for the play was a virtual literary conceit: Victor Frankenstein, hot in pursuit of his Creature on the Arctic ice,  and presumably shortly before he gets picked up by Walton’s ship, falls asleep on the ice one night and has a nightmarish vision of being in front of the gates of hell, where he is verbally assaulted by all sorts of shady and illustrious characters from literature, history, popular culture, even sports (dead or alive). They were allowed to ask @victorasleep questions or prompt him to respond, using  #pokefrank as the hashtag, or  try to get into a direct dialogue with the Creature himself, @franksdaemon, who was (strangely) reachable in the virtual world via #pokemonster.

(Note for context: I first developed the idea of a literary role-play on Twitter for Wilde’s The Picture of Dorian Gray back in October 2012. I have blogged about that experience here, and posted prompts for two more role-plays here and here.)

The full Storify of #Frankensteinplay is now available.  Some wonderful things happened this time ….

Because it was Halloween, people combined their Halloween experience with their novel-reading and role-playing experience and merged the physical event (trick-or-treating, party-going on Halloween) with the virtual one (the Twitter role-play) by posting pictures of decorations or themselves in costume, making costume-related jokes, and bringing Frankenstein’s creature together with other monsters to give him some company on Halloween. 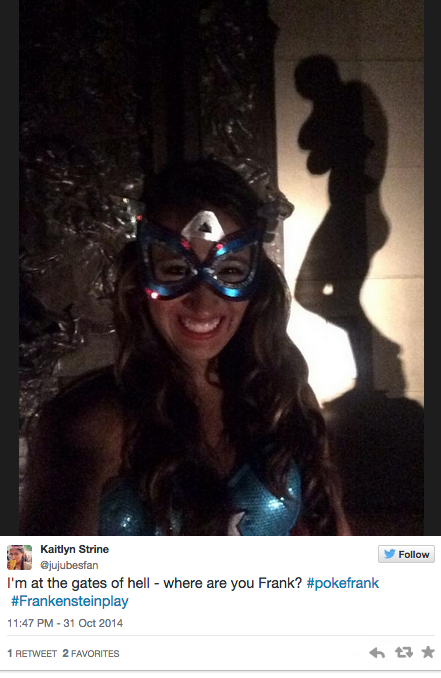 The instructors (Petra Dierkes-Thrun and Sebastian Thrun) made a special effort to dress the part for the role-play, doing their best to look credible as a Zombie Creature and a Haunted Bride (Elizabeth). 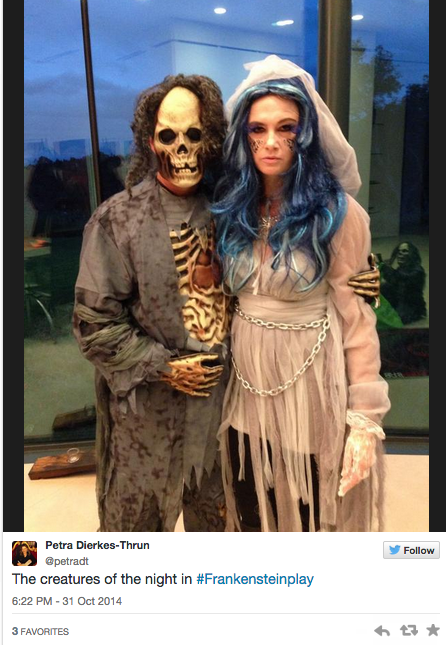 They even enrolled their six-year-old son, who doubled as a (very changed) little William.

The role-play announcement was widely retweeted and picked up on Twitter. At least one other literature professor assigned the role-play to her English class for extra credit:

For the first time ever, a Twitterbot (built by @stargould, currently teaching her great Augmenting Realities 2.0 class at Duke University). 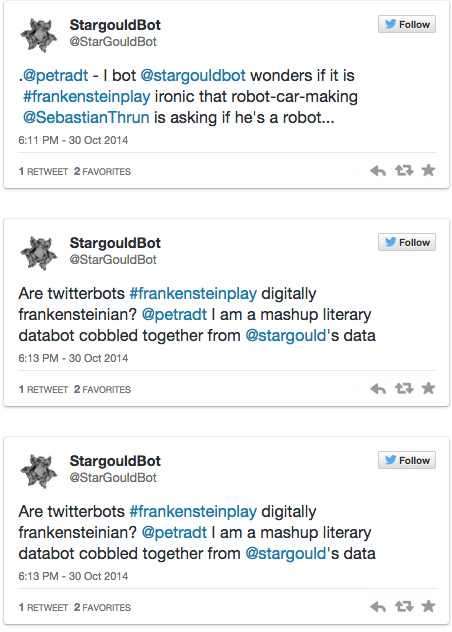 In addition to the bot’s uncanny visits, not one but TWO virtual avatars from other digital writing projects related to the Hybrid Pedagogy journal and operated by one of its founders, Jesse Stommel (@jessifer), tweeted with us and engaged the novel in creative ways: @MOOCMOOC is a grumpy virtual monster who eats MOOCs (and presumably people in MOOCs if they are not careful), and @digiduck is the virtual mascot duck developed for DigiWriMo (Digital Writing Month, a digital writing project running along NaNoWriMo, or National Novel Writing Month, which is happening every November).  @digiduck is clearly good with words and likes punning, in this case on the famous last line of Frankenstein, which sees the monster disappearing into the dark night: